The Screaming Eagles are one of the most deployed and recognized Divisions in the U.S. Army, with a combat record spanning from the paratroopers of World War II to the Security Force Assistance Teams deployed in Afghanistan today. 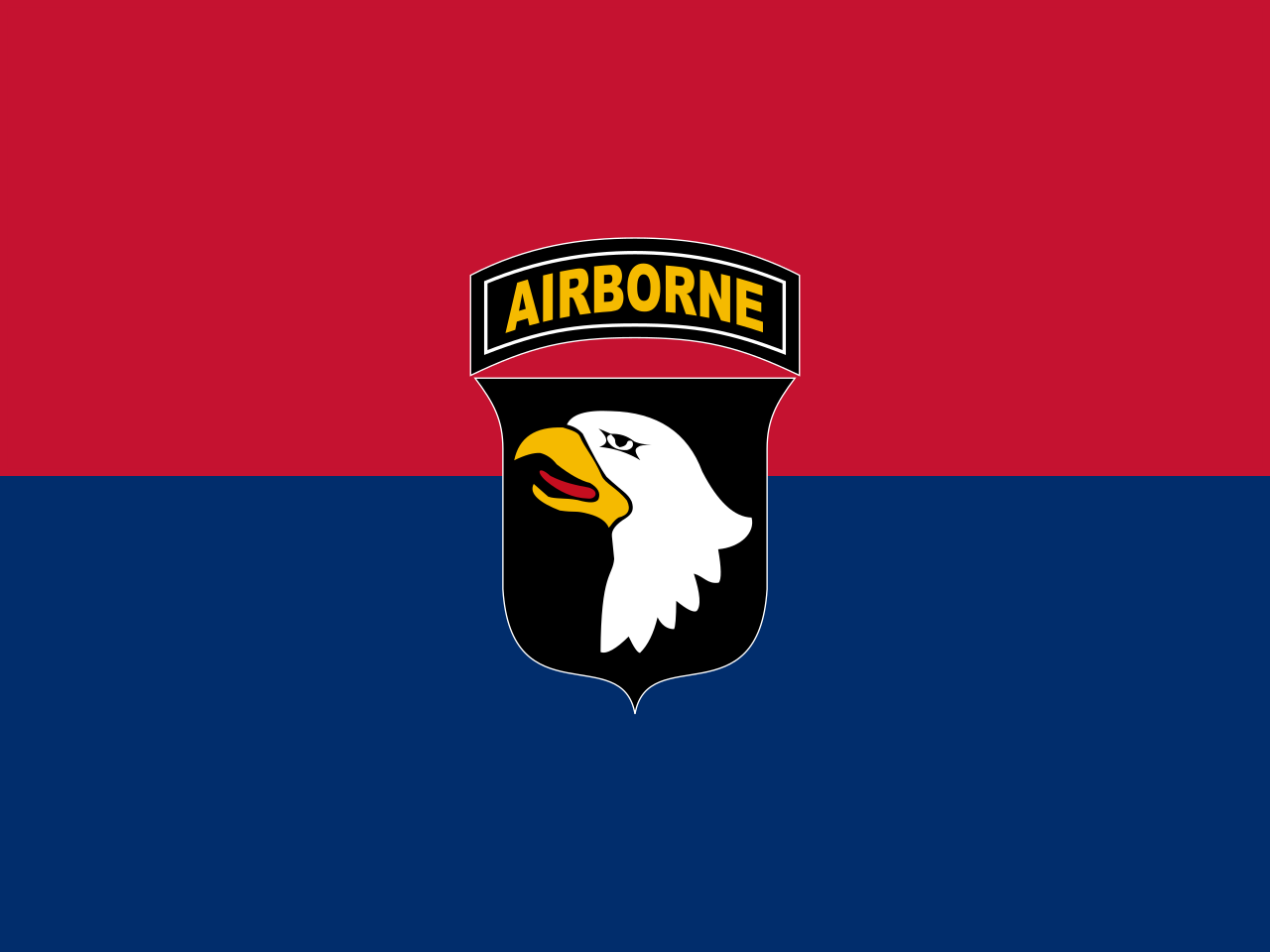 The 101st Airborne Division was activated August 16, 1942 at Camp Claiborne, Louisiana. Following its activation and initial training in the United States, the Division embarked for the European Theater of Operations in September, 1943 where it continuing its training in England. During the early morning hours of June 6th, 1944, the Screaming Eagles parachuted into the Contentin Peninsula becoming the first Allied Soldiers to set foot onto occupied France. The 101st Airborne Division, charged with clearing the way for the 4th Infantry Division's landing on Utah Beach, eventually linked the Utah and Omaha beachheads and liberated the city of Carentan. After a month of fighting, the Division returned to England to prepare for future operations.

Attacking the heart of Germany through the Ruhr valley, the 101st Airborne Division pursued retreating German forces into Bavaria. In spring 1945, the Screaming Eagles liberated the Landsberg concentration camp and Hitler's mountaintop retreat in Bertchtesgaden. The end of World War II in Europe relegated the 101st Airborne to occupation duties in Germany, Austria, and France. The Division was inactivated on November 30th, 1945.

On July 29th, 1965, the 1st Brigade, 101st Airborne Division was ordered to the Republic of Vietnam earning the nick-name of "The Nomads of Vietnam". The remainder of the Division remained at Fort Campbell until ordered to Vietnam in late-1967. During the enemy's ill-fated Tet Offensive in 1968, the Screaming Eagles were involved in combat operations from Saigon to Quang Tri Province.

In August 1968, the Screaming Eagles shed their parachutes in favor of helicopter-borne operations earning a new designation---the 101st Airborne Division (Airmobile). After the Tet Offensive, the Division settled into Thua Thien Province and continued offensive operations there until redeployed to the United States in early-1972.

The Division was re-designated as the 101st Airborne Division (Air Assault) on October 4th, 1974.

In August 1990, the 101st Airborne Division (Air Assault) deployed to the Middle East in support of Operations Desert Shield and Desert Storm. During the Liberation of Kuwait, the Division fired the first shots of the air war, and conducted the longest and largest air assault operations to date, securing Iraqi territory in the Euphrates River Valley.

The 1990s was a busy time for the 101st Airborne Division (Air Assault) seeing numerous deployments in support of stability and support operations world-wide. Fort Campbell-based units were deployed to Somalia, Haiti, the Sinai Peninsula, Central and South America, Bosnia, and Kosovo.

In the wake of the 9-11 terrorist attacks, elements of the Division quickly deployed to protect susceptible facilities in the United States from potential attack. Almost immediately, the 3rd Brigade Combat Team deployed to Afghanistan in November, 2001. In March 2002, the Rakkasans were, in part, responsible for offensive operations in the Shoh-I-Khot Valley that dealt a crippling early blow to the Taliban and al-Qaeda. After a challenging six-month deployment, 3rd Brigade redeployed to the United States.

In February and March 2003, the Division deployed to Kuwait in anticipation of combat operations against Saddam Hussein's regime. In a grueling air and ground movement of 570 kilometers through hostile territory and intense combat in urban areas, the Division exhibited its flexibility, lethality and firepower at every turn. Fighting its way from Najaf, through Karbala and Hillah, the Division eventually consolidated in Southern Baghdad in mid-April, 2003. Ordered to Northern Iraq shortly thereafter, the Division conducted the longest air assault in history and quickly assumed responsibility for Mosul, Iraq's second largest city, and the four surrounding provinces. In the months that followed, the Division concentrated on the goals of re-establishing security, the restoration of basic services, and reconstruction of civilian infrastructure. During this period, the Screaming Eagles underwrote the completion of 5,000 reconstruction projects, killed Uday and Qusay Hussein, and captured over 500 anti-Coalition insurgents.

In November 2005, the Division Headquarters, the 1st and 3rd Brigade Combat Teams, and the 101st Combat Aviation Brigade deployed to Iraq for a second time. As Task Force Band of Brothers, the Division assumed responsibility for the northern half of Iraq; the largest area of operation in the country. Partnered with four Iraqi Army divisions, the Screaming Eagles focused their efforts on developing credible Iraqi Security Force units that were capable of independent counter-insurgency operations. This monumental effort resulted in vastly improved security and the transfer of several areas to Iraqi control prior to the Division's redeployment in October, 2006. Under the new modular structure, 2nd and 4th Brigade Combat Teams and the 159th Combat Aviation Brigade were attached to other Multinational Division or Multinational Force commands elsewhere in Iraq.

Late-2007 saw the majority of the Division deployed again. The Division's 1st, 2nd, and 3rd Brigade Combat Teams and elements of the Sustainment Brigade deployed independently to Iraq where each served under the command of different Multinational Divisions then conducting combat operations throughout Iraq. Soldiers of the 49th Quartermaster deployed to both Iraq and Afghanistan to support combat and combat support operations. The 101st Combat Aviation Brigade deployed to Afghanistan and was eventually relieved by the 159th Combat Aviation Brigade.

The Division's efforts in Afghanistan resulted in successful and decisive operations at every level producing a significantly improved Afghan National Security Force committed to the defense of their country. Similarly, Screaming Eagles in Iraq measurably improved the quality of life of the Iraqi people and their trust in the Iraqi Army. We can now add Kandahar, Bagram, Baghdad and Tikrit to the list of places where the 101st has left its mark.